Home / World / Terrorist Brussels had sympathy for IS 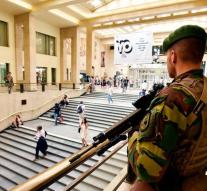 brussels - The man who wanted to take an attack on Tuesday at the Brussels-Central station, according to the Belgian federal parquet, had sympathies for terrorist organization of Islamic State (IS). Indications for this were found in the search of the house of Oussama Zariouh in the Brussels municipality of Molenbeek.

The bomb, which partly exploded, was probably made in the Louis Mettewielaan house. The parquet confirms Wednesday that chemicals and other materials have been found that make explosives possible. In the interests of the research, it does not want to provide further details for the time being.

The 36-year-old man was shot close by a military when he called 'Allah Akbar'. The OM in Brussels has already concluded that the use of the firearm was justified by the military.