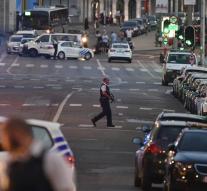 brussels - The man who wanted to attack the Brussels Central Station on Tuesday was a 37-year-old man from the Brussels municipality of Molenbeek. This is confirmed by VTM, reports the news sender. The man was shot by soldiers. The spike he had with him did not go down.

The police conducted searches last night, but nothing has been reported about the results. The reportedly French-speaking man was known to justice, but not because of terrorism. According to the newspaper De Tijd, he had one or more sentence crimes in his name.

The Public Prosecution Service deals with the case as a terrorist act. Various perpetrators of the attacks in Paris and Brussels in 2015 and 2016 also came from Molenbeek.

The station is now open again. Additional trainers and agents have been deployed in train and metro stations. Events continue, with increased vigilance, reported the crisis center. The threat level remains three on a scale of four

The National Security Council led by Prime Minister Charles Michel arrives at 09.00. The federal parquet will give a press conference at 11.00.