Home / World / Terrorist bomb would go off in stadium 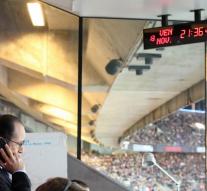 paris - Certainly one of the Parisian suicide bombers had a ticket for the match between France and Germany. His bomvest but was discovered when he tried to enter the stadium.

That said, a security guard of the stadium, reports the Wall Street Journal. The bomvest was discovered when he was searched. As he ran from security guards let the man detonate the bomb.

The police have the story of the man confirmed.