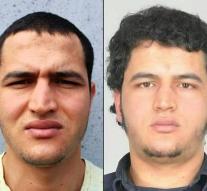 lyon - Surveillance cameras have captured on the Lyon Part-Dieu station that the terrorist Anis Amri Lyon bought a train ticket to Milan. The 24-year-old Tunisian Amri committed to all appearances Monday December 19 with a truck a bloody attack in the center of Berlin. In addition, twelve people were killed and dozens were injured.

Amri was December 23 by the Italian police slain in a drive to Milan, where he apparently had arrived from the French Chambery.

The French authorities have the route followed Amri not confirmed yet, but the French news Bmftv reported on Monday that he indeed can be seen on pictures taken at the station in the east of Lyon.

Amri would have paid cash for a ticket to Milan Chambery. About how he ended up in Lyon, is officially still unknown.