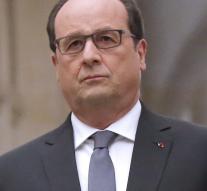 - French Prime Minister Manuel Valls and the Minister of Internal Affairs Bernard Cazeneuve his Wednesday morning in the Elyséepaleis with President Francois Hollande. They discuss the fight against terrorism for which the state of emergency has been declared. Since Wednesday morning early there in the Paris suburb of Saint-Denis a police action going against terrorism suspects who may have to do with the bloody attacks on Friday in Paris.

In Berlin, Chancellor Angela Merkel consults with members of her cabinet and special meeting on the terrorist threat. Following the cancellation of the football match Germany- Netherlands on Tuesday in Hanover. It was fear of a terrorist attack.