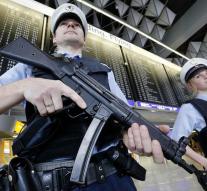 - The terrorist organization Islamic State (IS) devises new terrorist attacks in Europe, while extremists hun'kalifaat 'in Syria and Iraq suffer losses. This enables the European police organization Europol in a report published Friday.

Dozens IS terrorists were already in Europe and to carry out an attack in the near future. Most likely is that France is the target, but also Belgium, Germany, Great Britain and the Netherlands could be targeted.

For what it's going to attack, is not clear. It can attack in groups or suicide attacks of individuals. In the IS vision of the planners of terror attacks were committed in Belgium and France last year and this year a great success.

The terrorists had different methods and targets. Thus, inter alia, the editor of the French weekly Charlie Hebdo, music Bataclan in Paris, patrolling police officers, a priest, attacked the Brussels Airport and the crowd at a fireworks event in Nice.

In the Netherlands, warned National Coordinator for Counterterrorism and Security (NCTV) Dick Schoof mid-November before returning jihadists. Currently, approximately 190 of the total 270 to the 'caliphate' drawn Dutch jihadists in Syria and Iraq.