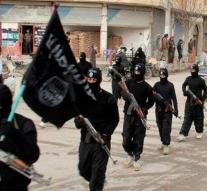 moscow - The terror suspects Sunday in the Russian capital Moscow have been arrested, were trained in camps of Islamic State. Reported that the Russian security service FSB Monday, state media message Sputnik Monday.

In an apartment where the group 's whereabouts is found according to the Russian channel 1TV five kilos of TNT. The explosives would be similar to the explosives used in the attack Saturday in the Turkish capital Ankara. This brought nearly a hundred people were killed.