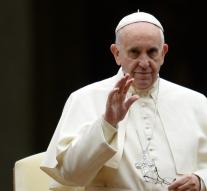 - Police in Italy and Kosovo have arrested four terror suspects who might have their eye on the Vatican and the Pope. The Kosovars were explained, among other via the Internet that Francis " the last" pope would be.

The four hands on internet applauded the attacks in Paris and threatened new attacks, according to justice in Italy. The main suspect, a supporter of Islamic State (IS) was arrested in Kosovo. When the man who lived earlier in Italy, the police found, among other weapons. The three others were arrested in Italy.

" Remember that after this no more new pope will come, this is the last ", ushered in the digital message of the quartet. Justice in Italy stated that " the most alarming messages, the messages are directed against the Holy Father. "