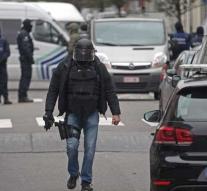 brussels - The Belgian police arrested eight terror suspects on suspicion of preparing an attack. No weapons or explosives would have been found during house searches.

That reports the newspaper La Dernière Heure. According to the newspaper, the house searches took place in the Brussels borough of Molenbeek and the Flemish towns of Mechelen and Geraardsbergen.

The suspects would be brought in on Monday.