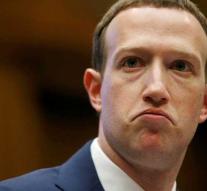 geneva - What Facebook understands by terrorism is so wide that governments can use it to silence opponents. That says a UN ambassador.

That envoy, Fionnuala Ní Aoláin from Ireland, wrote a letter to Facebook CEO Mark Zuckerberg. In it she writes that 'the use of such a broad definition is disturbing because some governments try to label dissenting opinions and peaceful or violent opposition as terrorism'. Concrete examples are not mentioned by Ní Aoláin, but she does say that it can lead to 'discrimination, overcending and arbitrariness'. According to her, it is not clear how Facebook determines whether a user is a member of a certain group and what a user can do about it.

According to Ní Aoláin, Facebook sees every armed group in a conflict as a terrorist, even if such groups adhere to war rules and humanitarian agreements.

Ní Aoláin is associated with the UN Human Rights Department. She is committed to 'protecting human rights and freedoms in combating terrorism'.

Last week, other UN researchers also expressed sharp criticism of Facebook. The regime in Myanmar would use the platform to stir up violence and hatred against the Rohingya minority, and Facebook would not do enough to do so. Facebook had already admitted that the approach was 'too slow'.