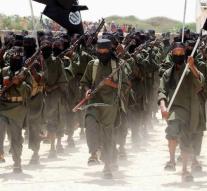 mogadishu - The Somalian terror movement al-Shabaab, which is responsible for a number of suicide attacks and other massacres in East Africa, is concerned about environmental pollution. Plastic bags are now prohibited.

The terrorist terror group linked to al-Qaeda 'can no longer see how plastic bags pollute the beautiful south of Somalia', could be heard on the radio channel of the terrorist group. 'It is a serious threat to the welfare of people and animals. 'In the same broadcast it was also reported that rare trees can no longer be felled.

The plastic bags are on the list of things that are forbidden in the area controlled by al-Shabaab. Western music, films and smartphones were already on the list. How the terrorist group wants the plastic bags to disappear from the region, has yet to be announced.