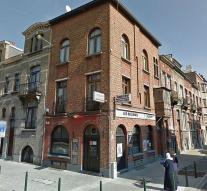 molenbeek - Ibrahim Abdel ran until recently, a pub in Molenbeek. The municipality Les Béguines on 4 November closed because there would be traded in drugs. Ibrahim blew himself last Friday at the Parisian restaurant Comptoir Voltaire.

Writes Le Parisien. A neighbor tells the French newspaper that the café was a stopping place for petty criminals, where both were drunk as geblowed. This is confirmed by the sign that justice has stuck to its conclusion at the door of Les Beguines. Then describe how agents in August " a number of ashtrays with half-smoked joints " saw in the cafe. On the board also states that Ibrahim objection could appeal against the closure by the police, but he did not take up that invitation.

Ibrahim and his brothers Allah and Muhammad would have been spotted last Thursday according to a local resident at the café.