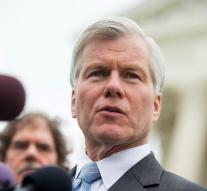 - The American Public Prosecution, the case against the former governor of Virginia Robert 'Bob' McDonnell dismissed for corruption. His wife Maureen goes free. That Justice announced Thursday.,, After careful consideration of the recent decision of the Supreme Court and of the principles of federal prosecution, we have decided not to pursue this matter '', informed the department in a statement.

A court in Virginia McDonnell sentenced in 2014 to two years in prison. Earlier a jury McDonnell was found guilty of accepting money in exchange for political favors. A businessman had the governor and his wife totaling $ 177 000 given to loans, gifts and luxury goods. The prosecution demanded at that time ten years. McDonnell announced after the ruling immediately appealed and received two months ago from the court all right. Now prosecution definitively scrapped.