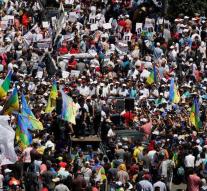 rabat - Tens of thousands of Moroccans have taken to the streets of the capital Rabat on Sunday to demonstrate against the imprisonment of leaders of the protest movement in the Rif area. The demonstrators walked with photos of the arrested activists and waved flags through the streets of Rabat. They demanded immediate release from the prisoners.

In the Rif area, large-scale demonstrations took place last year against the corruption, oppression and deprivation of the local population. The police picked up hundreds of people. The protest leaders went into the cell because they would have endangered state security.

A court in Casablanca sentenced 39 people in June, including protest leader Nasser Zefzafi, to prison sentences of up to 20 years. Lawyers from Rif activists say they will appeal against the judgments.

Since last October it is restless in the northern city of Al-Hoceima. Then fish merchant Mohsen Fikri was killed in a garbage truck. He wanted to save a party seized fish. His death led to protests against corruption, discrimination and economic malaise in the Rif.

Prisoners and their families had called for Sunday's march.