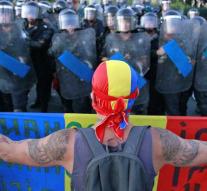 bucharest - Tens of thousands of Romanians have taken to the streets Friday in the capital Bucharest and other cities to protest against the government of the Social Democratic PSD. The activists want to finally do something about the deep-rooted corruption.

The demonstrators are also angry about the low wages and blame the government for trying to weaken the judiciary.

In Bucharest, a number of demonstrators tried to visit the security officers who were standing around the government buildings. Others threw bottles and other objects to the riot police. He used tear gas and a water cannon against the activists. About a hundred people had to be treated medically.

According to the World Bank, 3 to 5 million Romanians work abroad. Last year they sent an estimated 4 billion euros together.