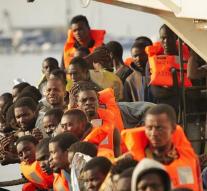 valletta - The European Union is determined to reduce the number of migrants from Africa. The 28 heads of government and heads of state took Friday at a summit in Malta, a ten-point plan that the migration across the Mediterranean decline should shout. The spearhead of the so-called Malta Declaration Libya was the departure point last year for more than 90 percent of the 181,000 boat migrants who reached Italy.

To stop the smuggling through rickety boats, more personnel, ships, money and training made available for the Libyan coast guard. The EU is also working with the United Nations to try to improve conditions in the Libyan detention camps where the mostly African migrants are detained.

Also, energy is put into early return to their country of origin and better control of the borders. Initially released 200 million. An important role is played by Italy, Thursday signed an agreement with the Libyan Prime Minister Fayez Seraj for his government to help more firmly in the saddle. The Italians were going to train include the staff in the camps and provide medication.

Prime Minister Mark Rutte stressed earlier in the day the importance of making arrangements with North Africa ' to stem the flow of migrants largely hopeless'. He pointed out that Libya has no central government, leaving only the question whether agreements can be made with that country. According to Rutte Italy ' more than anyone else in Europe good relations with Libya. '

Organisations like Oxfam, Amnesty International and the UN refugee agency UNHCR have sharply criticized because of the inhumane conditions in the camps. According to the UN, torture, rape and forced labor are no exceptions.

The Lower House said Thursday only agree to a deal if Libya can be guaranteed that people in Libya are collected safely and humanely.

EU leaders promise the targets in the declaration to run fast. They swear that they will respect human rights, international law and European values.