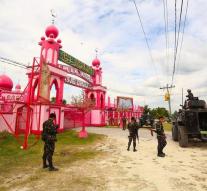 - The Americans have trained army commandos slain ten militants in the Philippines that are linked to al-Qaeda. Fifteen other militants were injured. Which reported a spokesman for the army Thursday.

The soldiers were on the island of Jolo clashed with about three hundred members of the Islamic rebel group Abu Sayyaf.,, This is part of our military operation to free foreign hostages being held by the terrorist movement, '' said the army spokesman. According to him detained two Canadians, a Dutch, a Norwegian and a Japanese by Abu Sayyaf.