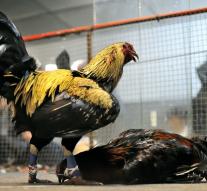 acapulco - During a shooting ten people were slain in a cockfight in southern Mexico. Unknown persons opened fire Sunday evening local time at the cockfight in the arena, local media reported Monday.

Among the dead were a woman and two teenagers. Another six people were injured in the raid in the village Cuajinicuilapa not far from the resort of Acapulco. Based on the found shell casings from automatic rifles mayor attributed the attack to a criminal organization. In the region of Guerrero fight different gangs for power. The mayor has to extra police and soldiers asked.