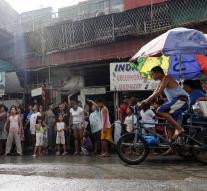 - A shoot-out Thursday night and ten detainees killed the explosion of a hand grenade in a Philippine jail. Possibly, there is a failed escape attempt, reported media in the Asian country.

According to the police chief of the city Parañaque, where the outbreak of violence happened, the prisoners suddenly pulled guns during a conversation with the director. He was wounded, but survived. The conversation went according to CNN Philippines on the request of the prisoners to be transferred. Guards responded by opening fire.