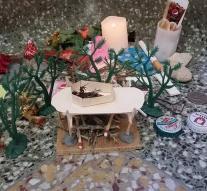 - What do you expect when there are already two weeks remains a dead cockroach in a school? Probably everything except students build a mini temple for the dead insect, which is becoming bigger and more impressive increases as time passes. At Texas A & M University, this was indeed the case. Michael Alvard, Professor of Anthropology, explained the growth of the temple from December 3 fixed on Facbeook.

On Thursday, December 3rd placed one of the students the first small tribute beside the dead cockroach, which thus was renamed 'Rosie Roach. Alvard shared this remarkable scene on Facebook. 'There is already more than two weeks, a dead cockroach in the stairwell of the anthropology department,' writes Alvard. 'An enterprising person now has a small temple for her.