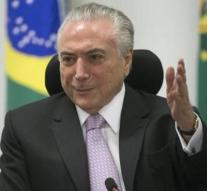 brasilia - Brazilian President Michel Temer has to answer to the federal police about his possible involvement in a major political corruption scandal. That has been determined by the High Court on Tuesday, according to the newspaper O Globo. The police have ten days to formulate questions. Those questions should answer Temer within 24 hours.

Leaders of JBS SA, the largest meat processing company in the world, said in a guilt in exchange for punishment that Temer had banned the bargaining of a potential witness in the so-called Carwash case. In addition, they would have paid the President almost 4.5 million euros in the past few years.