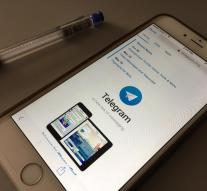 jakarta - The encrypted messenger service Telegram says to have closed certain public channels that, according to the Indonesian authorities, contain terrorism related material. Founder Pavel Durov said that this happened after Indonesia had access to the service.

Durov was shocked at the conclusion. He said nothing about Indonesia's request to close forums with 'radical and terrorist propaganda'. 'Telegram is heavily encrypted and privacy-oriented, but we are not friends of terrorists. ''

Because of the encryption, Telegram is popular among sympathizers of the Islamic State (IS) terrorist group. They use chat rooms with hundreds of users and also conduct private conversations.

Indonesia has the largest population of Muslims in the world. The country is struggling with increasing radicalism and has increased cooperation with surrounding countries to counteract a growing presence of IS extremists in the region.