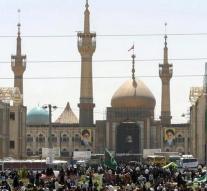 teheran - The police in Tehran have arrested five people on Wednesday following the attacks in the Iranian capital. As a result, at least twelve people died.

'After the attacks on ayatollah Khomeini's parliament and mausoleum, five suspects have been arrested,' said police chief Hossein Sajedinia against ISNA press office. 'We are investigating their involvement in the attacks. ''

The terrorist acts claimed by Islamic State also suffered more than forty injured. Eight terrorists in total overthrow the parliament building and the mausoleum on the southern edge of the city. Two of them blow up, four were shot and two survived the actions.