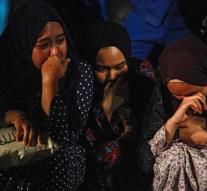 kuala lumpur - The police in Malaysia have held seven youth in connection with the deadly school fire of Thursday in the capital Kuala Lumpur. At the fire in the Islamic school, 23 people came, most of them were teenagers.

The seven, aged eleven to eighteen, were arrested and arrested for seven days, the police chief of Kuala Lumpur reported on Saturday at a press conference. 'I can now say with certainty that the case has been resolved with the arrests of the seven,' said Singh.

It was the deadliest incident of its kind in Malaysia in two decades and led to great outrage. Some call for better security at such religious schools.