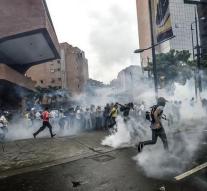 caracas - In protests in the Venezuelan capital, Caracas, a seventeen-year-old boy has been killed on Wednesday (local time). The death toll caused by the unrest in the South American country has risen to 66.

According to the government, the boy died after a homemade mortar grenade broke into his hands during a confrontation between hundreds of young people with the National Guard. However, the opposition declared that he was killed by a tear gas grenade fired directly on him.

At least 66 people have been killed so far since the demonstrations against President Nicolás Maduro began in April. 'The road is the only option we have,' said opposition leader Henrique Capriles. 'The government has closed all democratic doors. '