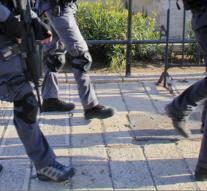 hebron - In the settlement of Kiryat Arba near Hebron on Thursday a Palestinian boy shot dead in the West Bank who had invaded a home and there had attacked a teenage girl with a knife. The 17-year-old Palestinian was shot dead after he had wounded a 31-year-old guard, the news site Ynet reported.

The girl was stabbed several times in the chest. She was taken to an alarming condition in a hospital. According to Israeli media she is deceased.