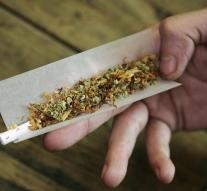 passau - A fourteen-year-old German boy on Saturday his father and mother reported to the police. He was tired of drug use from his parents.

The incident happened in the Bavarian Passau, near the border with Austria. The boy fled the house when his parents were using drugs again. The police searched the house and took the cannabis seized. The teenager is housed in a home.