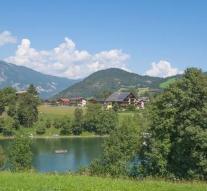 A sixteen year old boy was killed by the car in which he was made a fall of about 300 meters.

That happened on the night of Tuesday to Wednesday near the Austrian town of Zell. A 33-year-old man who was also in the car, was seriously injured.

The two were unknown causes of road on the Gampertunalpe in Tyrol. After she had not come home, a search was initiated after they were discovered. According to police, the two were thrown approximately 90 meters from the vehicle and then further cases.