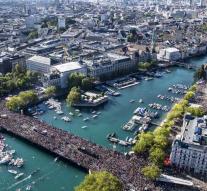 zurich - The 27th edition of the Street Parade in the Swiss city of Zurich attracted a million people. More than 200 DJs and musicians made an appearance at the event, which is considered one of the biggest techno parties in the world.

Among them was the German techno Paul Kalkbrenner, who opened the festival. On eight large stages and 28 music trucks- known as Love Mobiles- the DJs entertained the crowds. All artists of the Street Parade played for free.

According to the emergency services, two serious incidents took place in Zurich this weekend. A young man jumped from a bridge and sustained head injuries. Another man fell from a great height and also had to go to a clinic. Paramedics welcomed at least 160 visitors with complaints after alcohol or drug use.