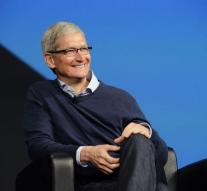 san francisco - Foremost CEOs from Silicon Valley try to talk with Man and Power to US President Donald Trump. Among others Elon Musk (Tesla) and Tim Cook (Apple) have asked the president to return to his intention to terminate the climate agreement concluded in Paris.

According to Bloomberg, both Musk and Cook tried eleven hours to convince the president of the need for the United States commitment to the climate agreement. Earlier, insiders already reported that influential bystanders of Trump as daughter Ivanka and son-in-law Jared Kushner are also opposed to denouncing Paris. More conservative advisors like Steve Bannon would like to congratulate America when it's backing the rest of the world.

For the moment, no final node has been cut by Trump. Earlier, Elon Musk has already suggested that the president no longer has to rely on his advice if the climate agreement slows down.