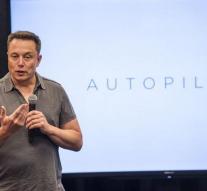 - A group of major tech pioneers, including Tesla CEO Elon Musk has invested in a new non-profit organization called OpenAI. The aim of the organization is to promote the development of artificial intelligence that replaces helps man in his stead.

The idea behind Open is that the development of artificial intelligence is so important that it should not be left solely to companies that want to use the technique in a profitable way. " AI is too important to only be used for things like advertising purposes or sort messages in a news feed, " said Oren Etzioni, director of the Allen Institute for Artificial Intelligence.Besides Musk also Google, Facebook and Amazon invested in the organization. In total, they have invested $ 1 billion in the project. OpenAI states that this amount will have a huge impact and gives the example that Apple's personal assistant Siri has started at a startup, where in five years $ 150 million has been invested.
NEW