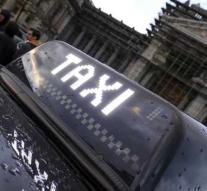 brussels - In Brussels, a traffic chaos threatens Tuesday due to the actions of the taxi sector. The police advises motorists to leave their car at home.

As early as 05.00 hours in the morning serious traffic is expected because demonstrating taxi drivers block the access roads to the Belgian capital. Also on the larger roads in the city and in the direction of Zaventem airport, the approximately eight hundred demonstrators want to obstruct traffic as much as possible.

Subways and trains run normally, but buses and trams can be hampered by the protest actions. To make the chaos even bigger there is a demonstration on Tuesday afternoon that crosses the city from the North Station.

The protest action was organized by the Belgian Taxifederation (Febet) in anger against Uber, the internet company that mediates between travelers and drivers.