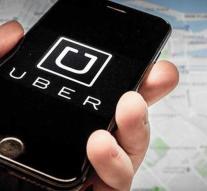 amsterdam - Angry taxi drivers want to attack this month at Uber's head office in Utrecht. They want to burst into the building with fire bombs.

That reports the AD. According to the drivers, the company is guilty of creating unfair competition. A message in the Telegram app service states that the assessment is scheduled for 20 March at 16:00. 'Everything and everyone is welcome. Bring bricks, fireworks and molotovs! '

According to the newspaper, the 'WegMetUber' group was founded in February and has 300 anonymous members.