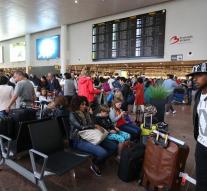 brussels - The terrorist cell which in early 2015 was curled up in the Belgian Verviers was probably at Brussels Airport, known as Zaventem Airport, coined. That the Brussels criminal court said Tuesday during the trial of the suspects. The ruling follows later Tuesday.

According to the court, there is no doubt that an attack was being prepared in the home in Verviers. When the raid police found weapons, police uniforms and explosives. Two suspects were killed. Of the sixteen suspected members of the terrorist cell, which had links with Abdelhamid Abaaoud, one of the bombers in Paris the end of 2015, there are nine fugitive.

In a mobile phone that was found in Athens in a house previously rented by Abaaoud, were sketches of an arrivals hall and a man with a luggage cart, which were mentioned 'bomb' and 'Zaventem'.


On March 22 this year a terrorist attack took place at Zaventem.