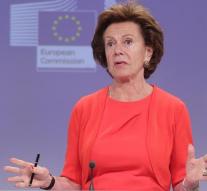 brussels - MEP Paul Tang (PvdA) has EU ombudswoman Emily O'Reilly turned to the affair surrounding former EU Commissioner Neelie Kroes (Competition). He decided this because the European Commission a month does not respond to a complaint Tangs initiative of 45 Socialist MEPs on Kroes.

' The Bahamas Leaks show clearly that Kroes from 2000 to 2009 director of an offshore company in the Bahamas. This is completely contrary to the European Commission's existing code of conduct. Now the commission case late in its course, we would like the opinion of the European Ombudswoman, 'said Tang.

Because the danger of conflicts of interest is too large, the Code of Conduct for current and former EU commissioners should be strengthened considerably, find the MEPs. ' Large companies now appear in their millions to buy political influence. This puts the credibility of the European Commission in the game, 'said Tang.

The internal European Commission ethics committee has been running an investigation into the case Kroes. Earlier bowed over Kroes' former boss in Brussels, former Commission president José Manuel Barroso, who this summer at the US bank Goldman Sachs is going to work. According to the committee, which, among others, the former Dutch judge Christiaan Timmermans session, Barroso lacks 'critical power' but it has not breached the rules.

The current committee chairman Jean-Claude Juncker has recently promised that he will propose to the stringent code of conduct.