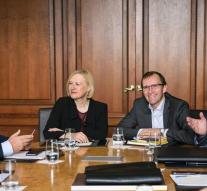 - The negotiations on the reunification of Cyprus resumed break after about a week. Nikos Anastasiades and Mustafa Akinci, the leaders of Greek Turkish Cypriots, met up again on Sunday in the Swiss resort of Mont Pelerin behind closed doors. This was announced by the national television channel RIK.

Anastasiades and Akinci try under the auspices of the United Nations to create the conditions to bring an end after more than forty years in the division on the island in the Mediterranean. Tricky problem is, inter alia, the drawing of the border. The new round of talks will last two days.

If that is also a success, following an international conference with representatives of Greece, Turkey, the former colonial power Britain, EU and UN. The goal is to make Cyprus a federation of two states with equal political rights. Both communities decide in a separate vote on the outcome of negotiations.

Cyprus has been divided since 1974 after a Greek coup and Turkish military intervention.