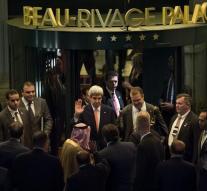 lausanne - The discussion in Lausanne on the crisis in Syria Saturday after more than four hours, ended without a joint statement by the nine participating parties. However, the Russian Foreign Minister Sergey Lavrov said that the parties will continue talks in the near future. How to be held new talks, Lavrov did not say.

US Secretary of State John Kerry sounded cautiously optimistic. He said there was consensus about various options that could lead to a ceasefire in Syria. The next time the parties talk about sequel plans for Syria will be next Monday, according to Kerry.

Sunday Kerry travels to London to meet with European foreign ministers and international partners on common positions to address the crisis.

New on the talks initiated by Kerry was also government representatives from Saudi Arabia, Jordan, Egypt, Turkey, Qatar and Iraq and Iran took part. Two weeks ago, the Americans stopped the direct consultations with Russia because the Russians in their not complying with the agreements.

Lavrov said after the match against Russian news agencies that the parties had discussed several interesting ideas and that they agreed that the political process for ending the war should be started as soon as possible. Kerry also spoke of hope that can lead to a so-called roadmap for political talks.