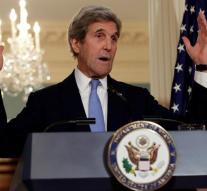 moscow - Russian Foreign Minister Sergei Lavrov has held a telephone conversation Thursday with his US counterpart John Kerry on Syria. According to Moscow, they talked about measures to normalize the situation in the east of Aleppo.

In those areas of the Syrian city of insurgents are still in control. Partly to give them an opportunity to sound the retreat through a few safe corridors have government forces of President Assad ally Russia and decided to observe a temporary truce.