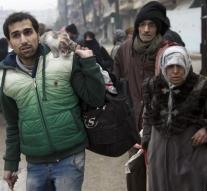 damascus - The failed file in Aleppo forcing the leaders of the countries concerned back together. Russian President Vladimir Putin on Wednesday will consult by telephone with President Erdogan of Turkey, as the Kremlin announced.

That the cease-fire can not make it, is the subject of many parties to make direct demands. So will the Lebanese Shiite Hezbollah movement that besides Russia now Iran should control the situation. The regime in Damascus has since rebels blamed for the failure. Vice versa, have resumed the rebels in eastern Aleppo President Assad accused the shelling. The latter view is shared by Erdogan.

Several parties reported Wednesday that there are already 15 000 people in Aleppo were ready to steps that would evacuate refugees in the buses. Among them were 4,000 rebels who wished to take advantage of the safe-conduct that gave the file.

A Turkish news agency could report that had managed to leave on the night of Tuesday to Wednesday a thousand refugees still Aleppo. They were en route to the city of Idlib.