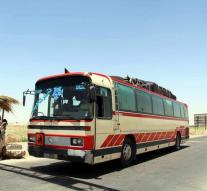 kabul - Most of Tuesday by the Taliban in Afghanistan kidnapped travelers are free. Tribal elders had negotiated the release of 23 of the 25 hostages, said a spokesman for the governor Wednesday. The other two will 'hopefully soon be released.'

The extremist Taliban had taken in the southern Helmand province 48 people hostage. These were bus passengers and truck drivers. Many were again moments later released but 25 remained in the hands of radical groups.

The extremists cast for months roadblocks and abduct and murder travelers. In late May and early June they had cars stopped in the northern province of Kunduz and taken many hostages. Twelve passengers they shot. At least eight others are still in their hands. In the eastern province of Gazni they had kidnapped and slain early June twelve soldiers and police.