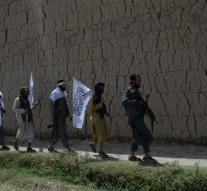 kabul - The Taliban have certainly released forty members of the security forces in Afghanistan. They had surrendered to the insurgents in the province of Faryab, reporting the Afghan news channel TOLO.

The Taliban would have overrun the district of Bilchiragh in the province last weekend. Dozens of pro-government troops laid down their weapons. Several released prisoners declared on Monday that they had to surrender. They had in their own words unsuccessfully asked for reinforcement and replenishment.

'The enemy had about 2,500 to 3,000 fighters who possessed Humvees and black artillery. We had only 26 soldiers and 20 agents ', complained a high police officer after his release. He stated that the government had been informed about the security problems in the district, but no action would have been taken.