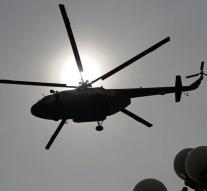 kabul - The Afghan Taliban has freed freed from a Pakistani helicopter had made an emergency landing in territory controlled by insurgents. It involves five Pakistanis and a Russian mechanic, told the Pakistani Foreign Ministry. The helicopter from the provincial government of Punjab went back Saturday in the Pakistani capital Islamabad.

The transport helicopter found itself last Thursday forced to land in the unsafe border due to a technical fault. The Mi-17 Russian-made, was en route from Peshawar to Uzbekistan for service.

Initially, there was eight passengers, but the department keeps on six.