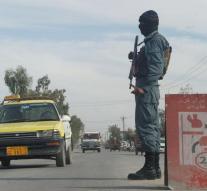 zabul - The Taliban killed at least 20 Afghan police officers in the southern Afghanistan in attacks at control stations. Ten others got injured.

Agents in Zabul Province were surprised by coordinated attacks. When reinforcement came, these groups were also shot. In the attacks there would also be dozens of Taliban riders killed.

The Taliban also claimed responsibility for a fatal Saturday attack on a bank in a province in the east of the country. The attacks are part of the spring offensive.