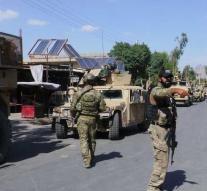 kabul - Taliban fighters killed eighteen police officers in western Afghanistan and wounded four others. The authorities reported Monday that the officers were part of a convoy that was attacked in the Farah province at the end of the afternoon.

The Taliban are gaining more and more ground in Farah. In that province, the Afghan government only controls the capital of the same name and the area with a radius of about 5 kilometers around it.

Out of dissatisfaction with the Taliban's advance, the government in the capital Kabul has replaced the Farah governor, a police chief and a military commander in recent weeks.