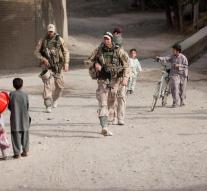 kabul - The Taliban are increasingly using children in combat in Afghanistan. Alone, at least a hundred children were recruited last year in Kunduz province and abused as a warrior. This is contained in a report by Human Rights Watch published Wednesday.

In Kunduz extremists children learn to deal with weapons and bomb-making and places. Especially poor families send their children to increasingly these so-called Taliban schools. Most child soldiers are between thirteen and seventeen years old, the report said. A UN diplomat reported ten-year-olds who are sent into battle. The Taliban do the reporting off as propaganda.

Under international law the recruitment of children is prohibited. According to the United Nations, every fourth death in Afghanistan a child.