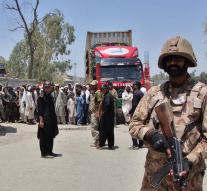 kabul - The radical Islamic Taliban on Tuesday in the southern Afghan province of Helmand stopped a bus and a number of trucks and 48 people taken hostage. The incident occurred in the early morning in the district Gereschk.

A police chief said that the Taliban had captured initially all passengers, but later had released a number. It would be eighteen women and children who were traveling with family. The militants would still have held about 25 hostages.

The extremists let know through internet that they,, 27 suspects '' had taken hold. Those among them who appeared to work for the government, were transferred to the 'court' of the Taliban.


The Taliban cast for months controlled roadblocks and abduct and murder while travelers. Include late May and early June they loved cars and buses in the northern province of Kunduz and took many hostages. Twelve passengers were killed. At least eight hostages they still hold.

In the eastern province of Gazni they kidnapped in early June twelve soldiers and policemen and slain. They're searching vehicles mainly government employees and employees of security agencies and international organizations. It is a targeted method to intimidate.