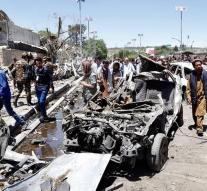 cabul - The Taliban denies being responsible for the bloody bombing in Kabul. The extremist movement sent a spokesperson to condemn attacks on civilians.

The explosion in the center of the Afghan capital killed eighty-one on Wednesday morning. Hundreds of people were injured. Most victims seem to be Afghan citizens. Video footage shows burning debris, partly collapsed walls and destroyed cars.

It is still unclear who is responsible. An attack in Kabul earlier this month was claimed by the Islamic State terrorist organization.