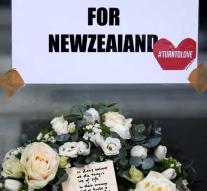 kabul - The Afghan Taliban condemned the attacks on two mosques in New Zealand. The radical Islamist group says in a statement that 49 Muslims have died a 'martyr's death.'

The Taliban, who themselves are fighting a bloody battle against the Afghan state, say that an attack on 'innocent believers' is an 'unforgivable crime.' The insurgents pray that the martyrs will come to paradise and that the wounded will soon get better.

The shootings in the prayer houses in New Zealand have cost the lives of at least 49 people. Dozens were also injured.