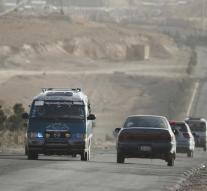 According to Wardak's governor, the Taliban destroyed some checkpoints after killing police officers. They would also have disabled part of the electricity supply.

The Taliban are trying to regain in Wardak areas that they had to release two months ago through a joint operation of American and Afghan soldiers. The Taliban fighters tried to gain control on some of the main roads in Wardak on Sunday, but according to the governor government troops succeeded in stopping the Taliban's advance.