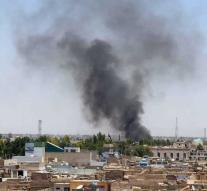 kabul - The Taliban have declared a three-day cease-fire on Saturday in Afghanistan next weekend. Then it is the Feast of Sugar on which the end of the fasting month of Ramadan is celebrated.

The ceasefire follows an announcement earlier this week by the Afghan armed forces to no longer take action against the extremist Taliban until 20 July. The militants added that battles against foreign armed forces would just continue and that they would defend themselves in an attack.